As mentioned in a previous review, I spoke about two bands being at the forefront of British alternative music, Alt-J was one, and now we focus on Foals. Whereas Alt-J have the arty kids, these guys attract the edgy rock kids and they were out in force in Manchester on a Saturday night.

Everything Everything were providing strong support for the night. Dressed in what can be only described as capes worn by extras from the future segments of the Bill and Ted movies, their own brand of pop-orientated art rock was going down well with the audience. They were enthusiastically chanting the “Regret, Regret” refrain from the song of the same name, and finishing on Distant Past, perhaps one of the band’s most memorable songs on their recent album, everyone was singing the chorus. It was certainly a strong performance, but the audience was still quite restrained. Everything Everything’s sound is quite easy-going and the opposite of the rowdiness of what was to come.

The industrial drums and heavy bass of ‘Snake Oil’ throws the audience straight into a mosh pit of excitement and energy. They then play a couple of songs from their first two albums; ‘Olympic Airways’ from their debut Antidotes and ‘Blue Blood’ from Total Life Forever. These songs very much sum their pop indie roots. The jangling guitar is very reminiscent of early Bloc Party or Two Door Cinema Club. The move in their career towards a heavier sound has certainly paid off with critical and audience acclaim. ‘Give It All’s haunting synths brings a more heavenly tone to the proceedings. ‘Mountain at My Gates’ causes the audience to erupt with passion and movement. Lead singer Yannis Philippakis spoke in a recent interview about how this song in particular has begun to seep into widespread popularity through regular radio play. Through steady patience and just letting the crowd move me along, I found myself at the front in time for ‘Balloons’ and’Providence’. It’s only up close to the band that you really see the strengths of their performance. Yannis buzzes round the stage like a bee on Red Bull and he isn’t afraid to jump straight into the audience and surf the crowd. He gives the crowd a chance to rest with slower numbers such as ‘Spanish Sahara’ and ‘A Knife In The Ocean’, but soon brings the audience back towards the final song, the impossibly catchy ‘Inhaler’. 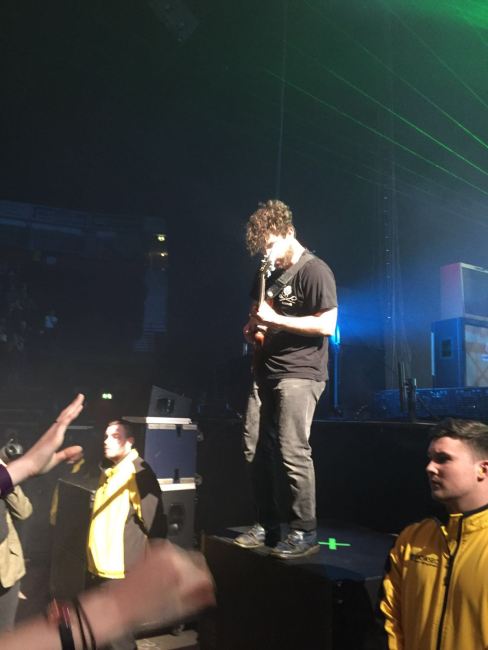 Foals have proved on this tour that they are capable a drawing and entertaining large audiences, which should keep them in good stead when headlining Reading and Leeds, and appearing at more festivals over the summer. As well as the great contribution of Everything Everything as support, the real support of the night came from the fantastic audience who never let up throughout Foals’ storming set, and we were rewarded with an epic encore featuring ‘What Went Down’ and ‘Two Steps Twice’.